The Home Office released statistics yesterday on the use of stop and search for the year ending 31 March 2018. While stop and search fell to a historic low of 280,000 in 2017/18 the recent trend in declining use is slowing and in some areas has reversed. And while its overall use has slightly declined, this decrease has disproportionately favoured white people. Stops of white people fell by 13 per cent from the previous but stops of black, Asian and minority ethnic people fell by just one per cent. This means that a BAME person is now four times as likely to stopped and searched as a white person. Black people, in particular, are now 9.5 times more likely to be searched than white people. 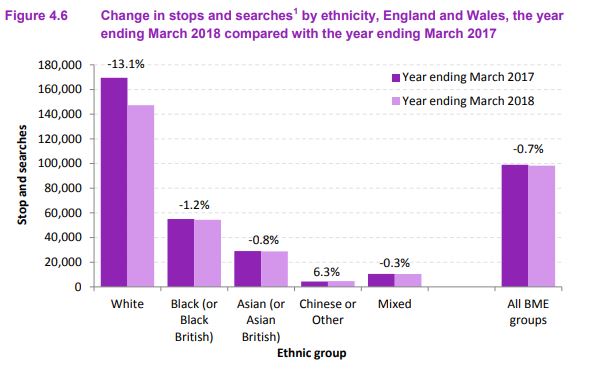 Particularly concerning is the re-emergence of searches under Section 60 of the Criminal Justice and Public Order Act 1994, which allows officers to search people without suspicion. These types of searches fell from a high of 150,000 in 2008/09 to just 617 in 2016/17, but increased to 2,500 in 2017/18. More recent data from 2018 show the Metropolitan Police carried out over 4,000 s.60 stops in August alone. Over 75 per cent of these searches were carried out on black people. 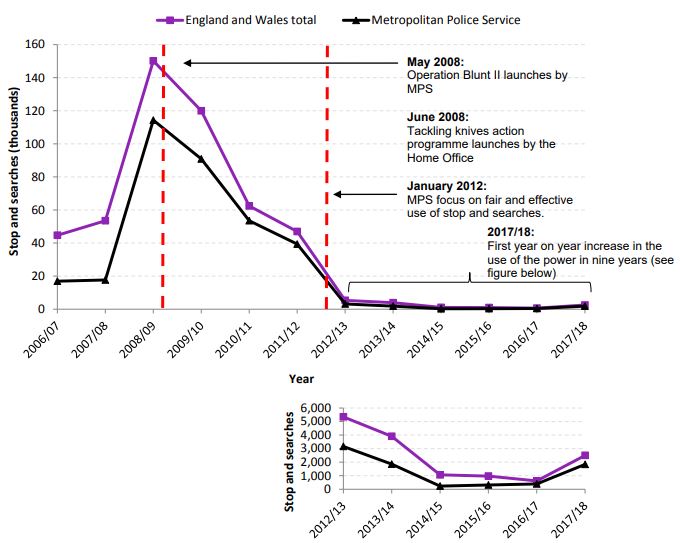 Some commentators suggest that stop and search might have a deterrent effect on crime, particularly on the carrying of knives. This argument has been used to justify the use of stop and search as a response to the recent increase in knife crime in England & Wales.  However the Home Office’s own Serious Violence Strategy confirmed that falls in stop and search are not driving the trend. And the cross-party Youth Violence Commission also recently concluded stop and search is, in the main, an ‘ineffective policy’.

Recent analysis of Metropolitan Police Service Data by the College of Policing exploring the relationship between stop and search and crime levels between 2004 and 2014 also found that higher rates of stop and search were associated with only ‘very slightly lower than expected’ crime rates the following week or month. The report concludes:

The inconsistent nature and low strength of these associations, however, provide only limited evidence of stop and search having had a meaningful deterrent effect. Thus, it is important not to overstate the benefits of stop and search, particularly at a force or borough level.

Furthermore, these types of analysis do not take into consideration the negative impact stop and search tactics can have on police/community relations (as powerfully highlighted in our report No Respect) and the consequential impact on public willingness to positively engage with the police and the law.

With resources stretched, priority must be given to evidence-based policing, but in the case of stop and search, the evidence of its effectiveness is simply not there. By the Government’s own admission recent falls in its use are not driving the increase in serious violence. We are particularly concerned about the rising use of searches where no suspicion is required and alarmed at the ever-widening discrepancy in the rate that BAME people are being stopped when it is so clearly damaging to good community relations.