Six weeks into my new role and I am enjoying re-familiarising myself with parts of the criminal justice system outside of prisons.  Last week I attended a meeting in Croydon organised by two local community organisations, Croydon Community Leaders and Another Night of Sisterhood (ANOS), together with officers from Croydon Metropolitan Police. The room was packed with members of the community, including many children and young people, who had come to discuss stop and search. 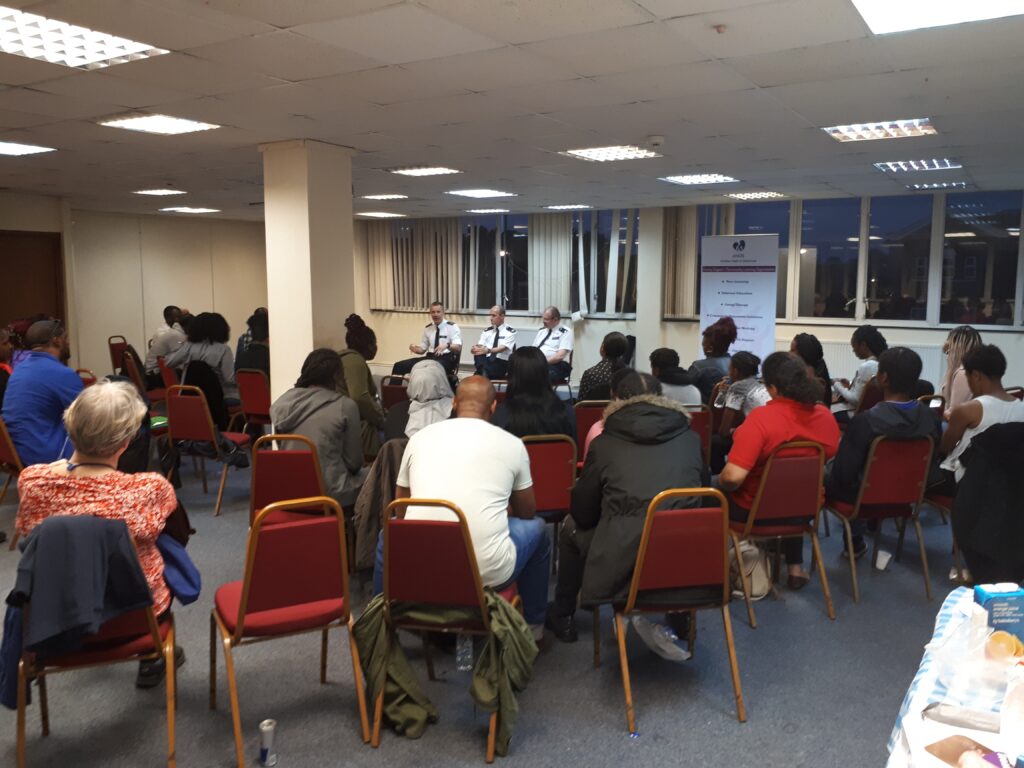 The conciliatory tone of the meeting is set when Donna Murray-Turner, Director of ANOS, welcomes the police, saying ‘if we want to save lives, we must go forward together’. Chief Inspector Knight acknowledges that the police do not always get it right but that they are committed to improving practice in his force.

Another officer describes some of the harrowing events that motivate the use of stop and search – he had seen a young man having his heart pumped by paramedics as a result of stab wounds and had a 21 year old girl die in his arms after taking ecstasy.  He tells the audience ‘that’s why we do stop and search. To protect you’.

Nevertheless, he admits ‘there are complex reasons why young people carry knives. I know stop and search on its own won’t fix it.  We need to use all the tools we have from parents, communities, schools and police.’

Repeated stops from an early age are a highly corrosive issue for young people, especially when the perception of those stops is that they are unfair or carried out in a rude or unprofessional manner. CJA’s report No Respect evidences this negative effect through first-hand accounts of searches by young black, Asian and minority ethnic people. As a local councillor at the meeting explains, ‘if a young person’s first interaction with the police is negative, that is not going to improve relationships between police and young people’.

Body-worn cameras had, in another officer’s opinion, helped to improve the quality of some interactions between the police and the public. But while they record 98.7 per cent of searches in Croydon, the footage is only kept for 30 days unless a complaint is lodged within that time. And while some images from body-worn cameras are viewed by the Chair of the scrutiny panel, the bulk of information available to her still consists of written notes, up to 400 per month.  She would like to be able to ask for footage from specific searches she says.

Responding to an attendee’s comment that ‘it’s excellent you are here, the good officers always attend these things, but we are preaching to the converted’, Inspector Knight explains that he has introduced dedicated stop and search training for all new officers and he wants to involve the community in the training. Croydon police have agreed to work with ANOS to run cultural awareness training. Donna explains this is particularly important for officers who come from outside of London.

Croydon Community Leaders Managing Director Renee set out plans to organise two types of outreach teams. The first will be a liaison team to engage with young people by going out on patrols with the police to monitor stops. The second outreach team will be a ‘point of contact’ team, who will mobilise in the event of an incident to provide counselling and after care to the family and friends and to use that moment to reduce the desire to retaliate, and instead build confidence in talking to the police as currently many witnesses don’t want to come forward due to a lack of trust.

‘We want to build community through scrutiny and transparency, to heal community divisions’ explains Donna. ‘There are many people who are saying they want to get involved to stop knife crime, so they can join the outreach teams and engage with our young people’. The evening ends on a discussion of the importance of role models and fostering greater aspirations for young people.

I was impressed by the large turnout at the event and the desire from all who attended to improve police practice through scrutiny and working together.  We know of similar initiatives run by CJA member Hackney CVS and we look forward to hearing about other promising approaches as CJA develops this work over the autumn.  If you know of similar schemes, please contact peter.keeling@criminaljusticealliance.org.uk.