In this #MeetTheMember blog, we speak to Alex Rose, Lead Coach at StandOut. Alex discusses how the death of a friend led him to work in the criminal justice sector, how he builds strong relationships with men in prison, and improving employment outcomes for people with convictions in the wake of COVID-19. 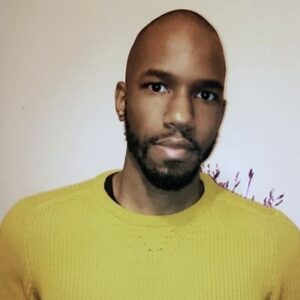 I’m the youngest of my siblings and I learned from their mistakes. I grew up in the garage and grime era, and this music had a profound effect on me, because it’s about coming from a council estate and putting your voice out there. It’s about the recognition that everyone’s voice has value. This is something I’ve carried into my work in the criminal justice sector.

What drew you to working in the criminal justice/voluntary sector?

After school, I went to art college and then worked in advertising. What I enjoyed most about advertising was working on briefs to do with behaviour change, uplifting communities and improving people’s lives. I also did lots of volunteering with Wandsworth Youth Service and community groups around Mitcham.

Then I lost a friend, Eugene, in a gang-related stabbing. This had a profound effect on me. In secondary school, people settled disputes in fist fights, but now children were comparing knifes on the playground. I realised I needed to do something to address this. In 2008, I set up the STOP campaign. I designed t-shirts to spread awareness, spoke on television about knife crime and did lots of community activism.

But eventually, I realised that a lot of the work I was doing in the community on gun and knife crime was with victims. The question came to me: Who is engaging with the young man in prison who committed the crime?

I decided to stop working in advertising. I took a warehousing job and volunteered with Croydon Voluntary Action Group, supporting people on probation. I recognised that I love and enjoy mentoring, journeying alongside people as they grow. I worked with a homeless project specifically for prison leavers and then for the Lifeline Project, working with young men involved in serious group offending, before I landed at StandOut.

Can you describe your organisation?

StandOut is a growing charity with two projects: one at HMP Pentonville and the other at HMP Wandsworth. We run intensive work-preparation courses, followed by one-to-one support before and after release.

Our focus is on building strong relationships with the men, which is why we’re based within the prisons. This allows us to connect with them throughout the day, asking how they’re doing over their morning porridge, for example. When they leave prison with my number in their phone, I want them to see me not through a transactional lens but as a lifelong friend, someone they can call and be real with. Someone they can call not only in a time of need but also when things are going okay.

We’re here to help people transition from prison back to society. Our focus is on employment, but we’re holistic. For example, we’ll connect people with drug and alcohol services, which will ultimately help them retain employment once they leave prison. We’re coaches first, employment enablers second. Everyone in StandOut has undergone coaching training. Through coaching, we help the men recognise their own inner potential and resources.

I oversee delivery at HMP Wandsworth. In my work, I also drive StandOut’s campaign for fairer and more inclusive employment practices; for example, by bringing employers into the prison to meet the men.

I love that everyone at StandOut is committed to the personal development of the people they work with. This isn’t just the values on our website – it’s in our DNA.

I also love that my work with StandOut helps me grow. Some of the people in prison face very complex problems, and to find solutions you often must think outside the box. My background in design and advertising has helped with this – I can approach a problem from multiple angles, always questioning. I still have that some of that restlessness that you have when you’re delivering a product for a client.

What are you currently working on?

I’m working on new content for our workshops, looking at how we can best prepare people leaving prison for the new job market in the wake of COVID-19.

We always side on optimism, but it is a difficult job market out there. Competition is fierce and there is still so much stigma for people with unspent convictions. It’s going to be challenging, but it always has been. This is just another hurdle to overcome. There are many training and transferable skills initiatives being launched now, such as the government’s Kickstart scheme, which we’re hoping will be extended to people with convictions. StandOut also offers progression grants, which fund training for the men to help them into employment. We’re hoping these grants will be utilised more often in the coming months.

How is your organisation responding to the challenges of COVID-19?

We couldn’t deliver our intensive support in the same way, so we acted very quickly and set up a freephone telephone service. People in prison can call via their in-cell telephones. Through this helpline, we’re provide people with information and support, such as updating them on how services such as job centres are working during the pandemic, or connecting them with other relevant services.

We’ve also provided a range of grants for people leaving prison, helping them with food and clothing, and paid for prison leavers to stay in a bed and breakfast for a few nights, giving us some time to connect them with more stable accommodation.

The team has also been doing lots of writing to the men in prison. There’s something about receiving a letter that reminds you that you aren’t forgotten.

What has been your proudest moment at your organisation?

I was delivering a course in the prison, and in between sessions I checked in with one of the participants to see how he was doing. His nan had passed away while he was serving time, and he told me how sad he was that her last memory of him was in custody, and that she didn’t get the chance to see how much he’d grown as a person.

He was overcome with emotion and began to cry. Prison isn’t a place that is supportive of people expressing their emotions, and the fact that he felt comfortable enough to cry in front of me was very significant for me. It reminded me of the power of relationships. He’s out now and working and when we connect, we always come back to that moment, which he says was very transformative for him.

Do you have any routines or habits that help you succeed?

Debriefing regularly with the team is important, because we’re exposed to lots of trauma working in prison. It’s important to take time to share and reflect.

I’ve also found it’s important to have the confidence to say: ‘I can’t offer a solution to you right now, but I’m here with you in the moment.’ Lots of practitioners feel the need to add value, but sometimes what the individual needs most is someone to just be there and listen.

Do you have any hobbies?

I’m a very keen swimmer. I also love eBay and go to lots of auctions and car boot sales.

It’s difficult to pick just one. I would say my favourite books are:

Boy A, by Jonathan Trigell. It’s a very powerful novel about a man imprisoned as a child and released into society as an adult.

Working with High-Risk Youth: A Relationship-based Practice Framework, by Peter Smyth. Everyone working with young people in the criminal justice system should read it. It’s a framework I live and work by.

A Distant Shore, by Carol Philips. It looks at two people’s lives, a middle-class lady and an African refugee, and how their worlds collide.

I follow an eBayer on YouTube, Daily Refinement, who not only discusses selling but his inspiring principles for life.

Never be afraid to ask questions.

Be honest at all times.

It can feel as a smaller charity that you’re isolated, but being a CJA member helps us understand the role we play in the wider currents of the sector. It reminds us that we’re one part of a greater whole.