Restorative Justice Week has been a catalyst for a welcome flurry of awareness-raising activities across the country as Police & Crime Commissioners, the Victims Commissioner, CJA members including Restorative Justice Council, Restorative Solutions, Catch 22, Wales Restorative Approaches Partnership and many others celebrate the transformative power of restorative justice and restorative practices more widely. Cleveland PCC have used the opportunity to launch a new RJ service and our member Victims First Northumbria have published a new magazine on RJ – Restorative Round Up.

Restorative Justice also made the headlines when Gareth Thomas, former Wales rugby player, revealed he had taken part in a restorative justice process after being subject to a homophobic attack. This week CJA member Why Me? launched a campaign to increase access to RJ for victims of hate crime.

But how much RJ is actually happening around the country, and how are Police and Crime Commissioners developing these services? The latest Crime Survey for England and Wales showed a small increase in the proportion of incidents where a victim of crime remembered being offered the opportunity to meet the offender (7.5 per cent up from 4.1 per cent the year before). But this proportion falls well below the aspiration that all victims of crime should be offered the opportunity.

However, assessing the proportion of victims offered RJ nationally may not capture the true extent to which RJ – and wider restorative approaches and practices – are being used at a local level across a range of agencies and environments. Following our work highlighting the benefits of RJ and how much a national entitlement to RJ might cost, the CJA has, with the support of the Association of Police and Crime Commissioners, been conducting a survey of local provision of restorative services. We want to better understand the barriers and where there is good practice in order to increase access across the country.

So far our survey has received responses from 31 of the 43 police force areas in England and Wales and early findings show that RJ services exist across a broad range of criminal justice agencies. 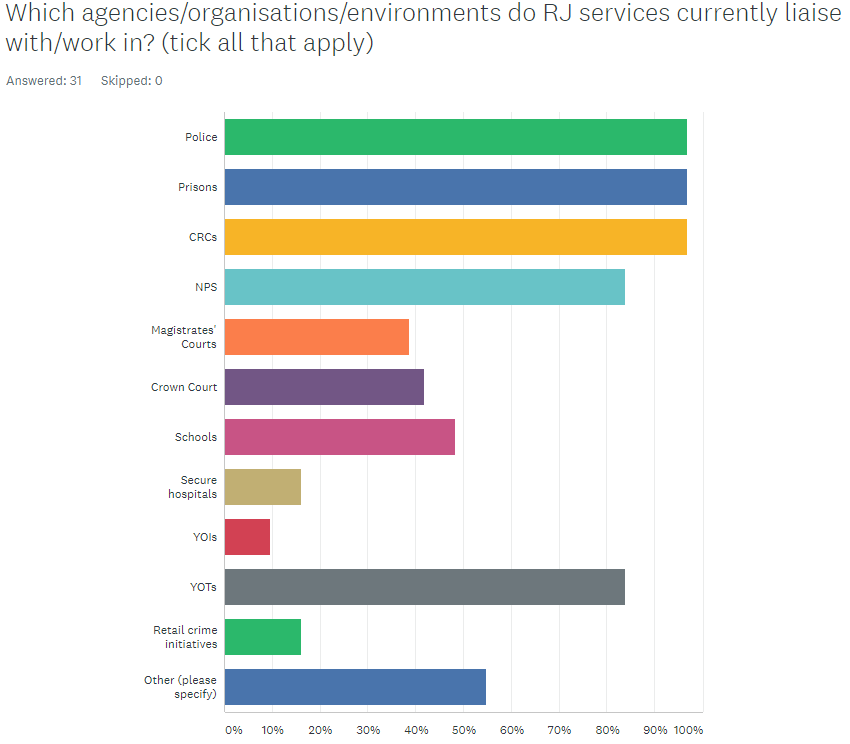 Beyond the categories listed above, it is clear that some parts of the country are embedding restorative practices in other areas such as domestic abuse services and housing. Also encouraging is the fact that nearly 90 per cent of respondents stated they intended to expand RJ services into other areas in the future, with a particular emphasis on working with the courts and in schools. Over 80 per cent of respondents also said RJ services were engaged in a broader spectrum of activities beyond RJ conferencing such as mediation, mentoring and restorative approaches to resolving harm and conflict.

However, it remains the case that developments are not uniform across the country and there are still many areas of the country where access to RJ – or restorative approaches more widely – remains a postcode lottery. Our survey highlighted the operational challenges that many RJ services continue to face, primarily low referral rates. Many areas highlighted inadequate information-sharing, low resources and poor understanding of RJ as contributing factors to lower than expected referrals.

The excellent initiatives demonstrated by RJ services during Restorative Justice Week include short films, training, blogs, media engagement and even a stand at London Bridge train station with staff handing out leaflets to commuters – all are fantastic ways of raising awareness in the sector, and with policy makers and the wider public to achieve the cultural shift necessary to achieve a more restorative-focused criminal justice system.

We will publish our findings with recommendations for increasing access to RJ in the new year. Happy #RJWeek2018 from the CJA!