Home Office statistics just published for 2016-17 show that black, Asian and minority ethnic people are now nearly four times as likely as white people to be stopped and searched in England and Wales, up from three times as likely a year earlier. Black people in particular are now over eight times as likely to searched, up from six times. So while the overall number of searches continues to fall (down 21 per cent to 300,000 searches annually) this fall has disproportionately favoured white people, a trend that started two years ago. 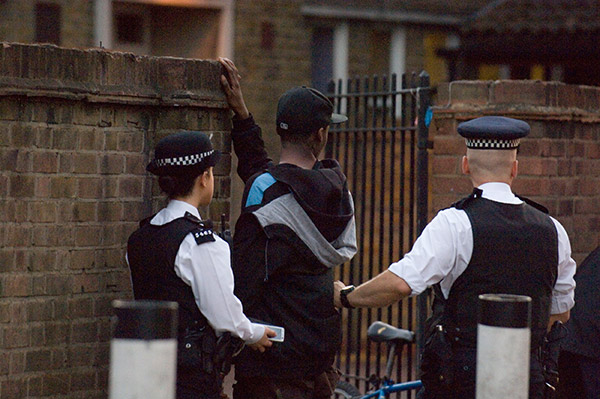 Reflecting a reported increase in knife crime, the overall proportion of searches for offensive weapons has increased from nine per cent to 11. However, the vast majority of searches are still for drugs, now just over three in five of all searches. The resultant arrest rate increased slightly, from 16 to 17 per cent.

For the first time, the official data includes statistics on outcomes following searches other than arrests, such as cannabis warnings and court summons. Crucially, it identifies whether those outcomes were linked to the claimed reasons for the searches. This data was only included as ‘experimental’ in the previous year’s statistics because fewer than half of all forces were able to provide it. Its inclusion signals a welcome increase in transparency nationally around the effectiveness of stop and search.

However, according to the Home Office, 39 per cent of all searches still resulted in ‘no further action’. These are the searches that cause most annoyance of all to their subjects. And remarkably, of 180,000 searches claimed to have led to an ‘outcome’, over half led to a Penalty Notice for Disorder (PND).

Of 95,000 PNDs handed out nationally, a massive 91,000 were handed out by the Metropolitan Police, crucially in circumstances which had otherwise led to nothing being found. Half of these PNDs in London were given to BAME people, a third to black people in particular. Without further specific information on these searches, it’s difficult to be certain why so many PNDs – which can include a fine of £90 – are being issued by the Met Police in such circumstances.

However, given the often confrontational nature of a stop and search, there are good grounds to fear that a very substantial number of these PNDs may be being issued because a person being searched objects in some manner to the search and may consequently engage in bad language or jostling. Given that 96 per cent of these PNDs were issued following searches where nothing was found, it’s very disturbing indeed that, on the face of it, confrontations leading to a penalty notice are being generated in this way.

No Respect, the CJA’s recent report into young BAME men, the police and stop and search can be found here.