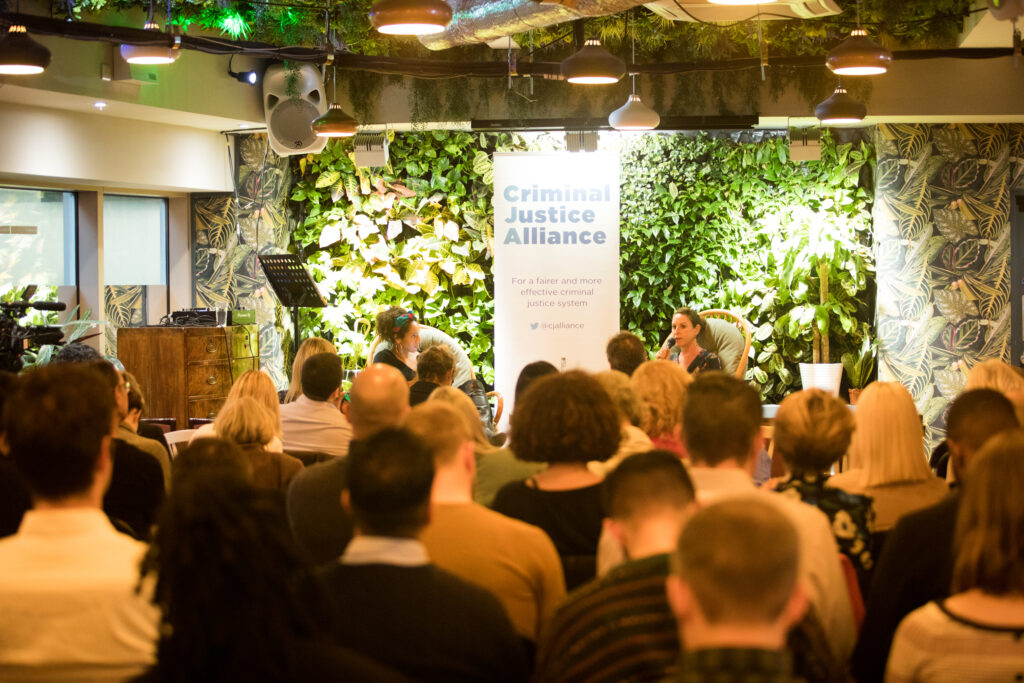 A survey was carried out in spring 2021 to capture a broad range of member views on the Criminal Justice Alliance’s progress on its Connecting for Change strategy. Over half of the CJA’s membership (86 organisations in total) took part. This summary outlines key findings in three areas, namely member engagement; influencing; and contributing to lasting change.

‘The Criminal Justice Alliance has now found it’s voice and mojo – it should keep on going.’ Large organisation.

‘The structured thematic discussions around race and racism were very strong.’ Small organisation.

Amplifying voice and providing information. Members are appreciative of the role the CJA plays in amplifying voice and active listening. In addition, the CJA was identified as a ‘critical friend’ and a ‘champion of change’ which leads the way on criminal justice reform.  Overall, respondents identified three clear strengths:

However, one suggested area for improvement is for the CJA to better help members learn and reflect, with 13 percent of respondents disagreeing that the CJA helps their organisation to learn and reflect on their work.

Communication tools. The CJA’s current broad range of communication tools are well received. Three tools were deemed most useful by respondents, namely member bulletins, policy bulletins and the CJA’s roundtables and expert groups. Around 70 percent of respondents rated both the member and policy bulletin resources as ‘very useful’, with several small organisations recognising the bulletins as an important ‘entry point’ tool to the CJA.

Events. In terms of events, 71 percent of members said the CJA’s Members Meetings are useful. Six members (representing a range of organisational sizes) voiced further appreciation of the CJA’s current approach to selecting topics and speakers for its Members Meetings and other events, summed up by a small research organisation member as ‘a good mix and balance.’ Positive insights were shared by members on the value of CJA events in helping to shape collective issue responses. In addition, nearly 70 percent of respondents acknowledged the CJA Awards as useful.

‘The CJA could be more bullish in challenging policy areas which are detrimental.’  Medium-sized organisation.

‘The criminal justice system can’t build back better unless it arrives in the twenty-first century.’ Small organisation.

The CJA’s approach to engaging members in influencing policy and practise is applauded.  Over four in five respondents agree that it is effective in this role, with more than 40 percent of members rating the CJA as ‘very effective’. Forward suggestions centred on refining the existing Connecting for Change strategy in areas such as strategic focus and impact; influencing tone; and building coalitions.

Influencing approaches. Several members highlighted the need for a clearer strategic focus and others recommended that the CJA take a stronger position on controversial issues, citing its independent position for leverage. Building issue-specific coalitions was another suggestion, including a greater focus on collaboration with community-based prevention and resettlement services, Black and minority ethnic organisations and youth organisations.

COVID-19 response. Over 80 percent of respondents identified the CJA’s pandemic response as valuable. A key area identified by respondents that the CJA should focus on in terms of building back better was improving prison conditions, including access to technology.

Respondents expressed broad support for the CJA’s work across cross-cutting themes and changing how people think and communicate about criminal justice. A majority of members (80 percent) said the proposed lived experience leadership programme would be ‘very useful’. In addition, while nearly half of all members identified CJA’s work across lived experience as very effective, just under a quarter of members judged its work on a diverse workforce to be so, although it should be noted that some of this work has been delayed due to responding to the pandemic. Meanwhile the CJA’s work on scrutiny, restorative justice and equality was identified as ‘very effective’ by 40 percent of members. In terms of communications, respondents most appreciated the CJA’s strategic role in contributing to national media opinion pieces and its work with journalists on constructive reporting.

The member survey affirmed broad support for the CJA’s current approach, including notably strong approval for its pandemic response. There was an appreciation of the CJA’s work on race equality and its emerging role in lived experience leadership, but members highlighted a need for the CJA to maintain a strategic focus and identify organisational impact.  In terms of working with others, a forward focus on more issue-specific and community-based coalitions is suggested. Finally, a survey recommendation for a bolder influencing approach suggests that the CJA may have missed an opportunity to take a bolder stance on racial disparity in response to the Black Lives Matter protests in the summer of 2020. Of note, there is emerging evidence of the CJA taking a bolder policy stance in its current response to the Police, Crime, Sentencing and Courts Bill and in the submission of a policing super-complaint.

Suggested areas for improvement include the CJA ensuring members are supported in their own learning and reflection, such as through greater sharing of good practice. In addition, a stronger thematic focus on a diverse criminal justice workforce is recommended, with 2021 work already planned including a report summarising the workforce diversity roundtables held in 2020. Finally, the CJA could consider deprioritising specific areas of work as part of achieving a tighter strategic focus. The final Connecting for Change evaluation report in autumn 2021 will provide more detail.